Storyteller Productions is the vision of owner/operator Beth Turner, who has tremendous respect for every person’s story… how wildly different we all are yet the same in our heart, and we all have a story to tell.

Turner holds a master’s in documentary film and has been chasing the human story through a career in broadcast news, print journalism including columns in GTR Newspapers, through public television at RSU Public TV, through public education at Tulsa Public Schools and Union Public Schools, and through the feature-length documentary currently in production titled, “Randy Crouch: Survival of the Fiddlist.”

Turner knows firsthand how hard it is to preserve precious memories. 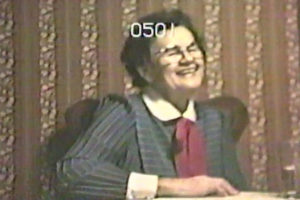 Uncle Gary didn’t know the time code was on Grandma Turner’s forehead!  At least Grandma’s voice and laughter is preserved, which is a priceless gift.

Whether it’s family memories you want to preserve, a product or service you’d like to promote, or a presentation that you’d like to stream online, contact us today. Your story deserves to be told.